Following an invitation from our past President, Tony Martin, who now lives at Nelligen on the south coast of NSW, to visit him and participate in the VVCMCC Australia Day Rally, Rob Mutimer, Sue and myself loaded our Velocette Venoms on to the trailer and headed south to sample some southern rally routes. 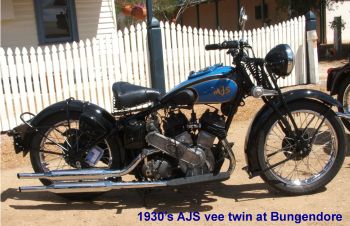 After spending Thursday night with Tony, we headed from Nelligen across to Canberra on the Friday morning in time to register for the rally. This event was based at the Exhibition Park In Canberra, locally referred to as the EPIC centre. When registering we received our rally pack, complete with instructions and badge. As the rally was completely marshalled there were not too many instructions to worry about.

The Friday ride was to commence at one thirty in the afternoon allowing sufficient time for the one hundred and fifty one entrants to get themselves and their machines prepared for that afternoon’s ride. Following the departure of the marshals the riders were welcomed and briefed on the afternoon’s activities.

The ride was waved off with the vintage, veteran and military machines leaving about ten minutes prior to the rest of the group to avoid confusion at the starting area. The EPIC centre is situated at North Canberra, so the ride proceeded north away from the city, before turning toward the east to the sleepy little village of Bungendore, for afternoon tea or whatever beverage the rider considered appropriate. I did not see too much tea being consumed though. After a call to arms by the ride organiser with a bullhorn, the riders returned via a different route to the EPIC centre, where any riders not wishing to take their machine home could lock the bikes in hall for the night.

Saturday, following our briefing we headed north away from the traffic before swinging west through Sutton and on to Gundaroo for morning tea. Allowing enough time for the marshals to get to their appropriate places we then proceeded east across the main highway through the hill country back to the EPIC centre where lunch was provided. Saturday afternoon’s activities were in the form of a motorkhana consisting of a slow race, a slalom event and a test of judgment, where the rider had to indicate the width of his or her motorcycle on two vertical poles and then ride slowly through this space. After witnessing this event we must be thankful that our road makers give us plenty of room for error! Following afternoon tea, cakes – pikelets and cream, we dispersed to clean up for the presentation dinner in the hall that night. 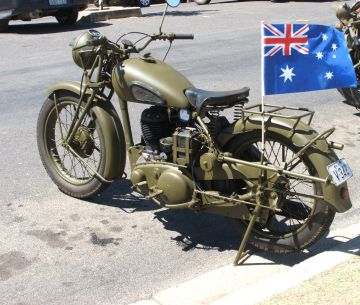 The setting for the presentation dinner was unique with all the bikes parked along both sidewalls of the hall and as you can imagine with one hundred and fifty one entrants, it was quite a large affair with one hundred and seventy five people being seated for a two course meal. Raffle tickets were sold prior to the commencement of dinner with a huge array of prizes from chain lube to a riding jacket. On completion of the meal the rally trophies were presented, with Bob Condie of Brisbane and his beautifully presented Indian, collecting a trophy to go with the raffle prize he already had in his bag. 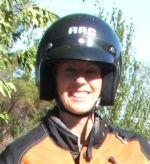 Sunday’s ride departed at nine am and travelled around the out skirts of the city avoiding the traffic and then headed up the mountains to Tidbinbilla reserve, the site of the space tracking station, where an enormous amount of cakes and sliced fruit (a first at any rally that I have attended) were presented for morning tea. Following the break, the road took us down the mountain via a different route to the rally base at the EPIC centre, where lunch of roast beef, lamb and ham were served. This concluded the rally and our bikes were then loaded on to the trailer for the trip north, to Queensland.

In summary, it was a great rally, although the rides on Friday and Saturday were a little on the short side, considering we had travelled so far to the event