I bought this bike from Graham Ward after it had been sitting in his garage for nearly 15years. The photo shows the bike in Wardy’s garage. The Velocette was complete, but I was told there was a noise coming from one of the main bearings.

After stripping the engine the trouble was in the timing side main bearing, which had a one thirty second of an inch slop, good enough for a BSA, but not up to the standard of a Velo. 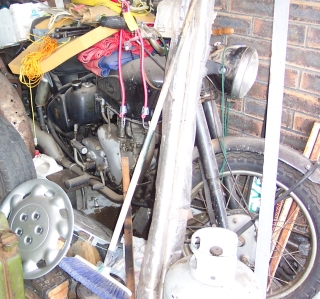 With new bearings – rings – big end and bushes, spacers in timing side, the engine went together well, but would not fit in the engine plates with the gearbox. When I dismantled the bike there were some washers that fell on the floor when the gearbox was removed and I thought, I will find out where they came from on the rebuild. After checking all the measurements I found that the engine was 3/16 inch wider than the gearbox. After much talking and phone calls locally with no answer to the problem, I spoke to a Norm Trigg, Technical Officer of the Velo Club, who explained that I had a rigid frame Mac engine in a swing arm frame. The back bosses on the rigid motors (where the studs go through the engine plates) are 3/16 inch wider, hence the washers to space the gearbox. The problem now, was how to machine the faces, as the engine had been assembled? Every hole in the engine was taped over and the assembled engine was mounted on the mill table where 3/32 inch was milled off both sides of the boss, pretty awkward when the motor has been bead blasted, you are on your own and do not want to scratch it.

Once the bike was reassembled starting was the next problem!!! With Rob Mutimer’s assistance we bleed the oil lines and attempted to start it, but there was no life whatsoever, it was just dead. After many many kicks it burst into life and started every time for the rest of the day. After a phone call advising that the bike was finished, Graham came over the next day for a look at the restored MAC, have ago said I, all proud, thirty kicks later out of the blue it starts?

In the rebuild the magneto was striped, greased and reassembled and when tested, produced a nice big spark. In desperation I removed the maggie and the next day I took it to Ivan Brown, who tested it on his test bench to find that it was only sparking every 6th revolution at kick over speed. With maggie reconditioned and back on the bike, it still would not start, I got this sick feeling in my stomach, and left the bike for three days. Having continually thought about the problem it suddenly came to me that I had timed it at 38 degrees after TDC. Silly me!!!! (That is not what I said). All is well now and it chuffs along very nicely.

In the early seventies, David Dettmar saw the MAC one Friday afternoon in ABA Motorcycles, Fairfield Road Yeronga. The sale price was $400.00. Thinking about it over the weekend he decided to return on Monday and purchase it, but the bike was sold before he arrived at the shop. 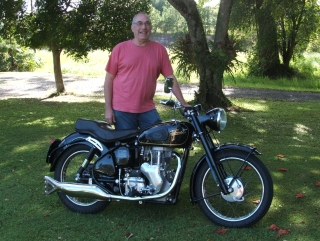 Some eighteen months later a MAC Velocette was advertised for sale in the Courier Mail newspaper for $150.00. The machine was described as fire damaged. When inspected at Indooroopilly it turned out to be the same MAC previously seen at ABA Motorcycles. The story being that it was purchased on the Saturday and when the new owner tried to start it on the Sunday the bike caught fire, was badly damaged and then sat for eighteen months under the house.

David parted with the $150.00 and the MAC was taken home to the Dettmar workshop and restored.  David used the bike as daily transport running up some sixty six thousand miles, which included a trip to the National Velocette Rally at Bundanoon, southern NSW. In this period the only major problem being a broken front down tube of the frame and this was replaced with a new old stock frame.