The Tiger ninety passed into my possession from Bill Allen, a past treasurer of the British Singles Club, some ten years ago. It had been sitting in Bill’s shed for many years without being ridden and I had passed comment that if he ever wanted to sell it, I would be very interested in a chance to buy the bike. Many years passed when, out of the blue Bill phoned and said, we are shifting house and I am going to sell the Triumph, if you are still interested?

I was probably there by the time he hung up the phone. Bill informed me that he had previously purchased the bike from Col Rowe but had never been able to come to grips with its many traits, so the challenge began!

With the bike now in the Ward shed I set about curing its many bad habits. New wheel bearings, Steering head bearings, true up the frame, straighten the front forks and the list went on until the bike was reasonably nice to ride. So, being happy with the results I again put it up on the hoist and gave it a good clean and polish, only to notice, when it was again on ground level, that I had missed some dirt and stains on the front wheel. This was not good enough I thought, so back up on the hoist the Tiger went, but as I was only cleaning part of the front wheel I did not strap it to the hoist.

Second mistake, whilst cleaning the wheel it slipped off the jack I had under the crankcase and fell upside down on the floor with devastating results. This led to the Tiger being pensioned off to the back of the shed for another couple of years, until another bucket of enthusiasm could be found.

Whilst discussing his Girder Fork Tour, David Detmar pushed my case to again put spanners to the Tiger 90 and prepare it for this tour, which was to be run in July of this year. After a lot of panel work and straightening, the Tiger finally had its trial run around Kalbar, on the Saturday of the Teams Trial. 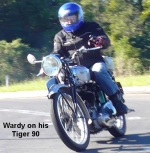 Unfortunately it was running a bit lean and tightened up pulling Sue and I up one of the steeper hills. After cooling down the restart showed no after effects, may be the Tiger 90 demon was finally off my back and we were now ready to tackle the Girder Fork Tour.