Sometime in 1995, one of my Kiwi pals, a certain Marty Hewlit of Katikati, said "you should have an old AJS" and he just happened to know a bloke in Wellington New Zealand with a 1939 model 8 twin port 500. While I didn't cave in totally, I said I would consider it. Much to my chagrin, said AJS turned out to be a frame with motor, gearbox and oil tank - my enthusiasm warmed and the restoration got started at glacial speed.

Over the next six years the junk pile kept getting added to and a vague motorcycle grew. 1939 AJ's have some unobtainium on them, eg. The wheels are Palmers and it took begging and cajoling to get a redeemable pair. Chrome platers saw the project as a way to settle second mortgages and a reasonable tank was turned into a swan. The front mudguard was sourced in Norway and thanks to Norm and Linda Maddox the missing Palmer rim became available.

Ken Mc Intosh the Manx Norton builder, reached into his goodies bag and provided the handlebars, another piece of unobtainium. A country antique store provided the headlamp shell and lens with other parts being sourced from several UK firms. After all the waiting there were no more excuses as to why the restoration could not proceed.

The motorcycle's crowning glory, its beautiful petrol tank and its thousand dollars worth of chrome got a Brian Medrecroft superb job of painting

My great pal John Hartles took over the real work and after all his efforts a bike appeared. John rode the wonderful thing in the Chelsea Walsh Hill Climb and recorded 39.9 seconds, which was only bettered by post 1960 motorcycles. 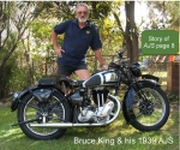 I was rapt to finally ride the 1939 AJS to the New Zealand Jampot Rally, where the first prize for pre 1940 and Best Single awards, were added to the sideboard. (Now no comments about trophy hunters please). In March 2007 the bike is finally wearing a Queensland number plate and Wendy and I look forward to every rally we can get to. All this from a man who used to believe that only between 1955 and 1970, did interesting bikes get build. Now perhaps Barry Deeth and Company won't keep saying "you need a girder fork bike in your collection".
They were right!